Without hesitation the number one book I’d recommend this year is Chofetz Chiam. The full title of the book is lengthy, but descriptive, “A Lesson a Day: the concepts and laws of proper speech arranged for daily study.” You’d think he was puritan by the run-on sub-title, but alas, he’s far from that, being a Jewish Rabbi of the late 1800s.

This book had a tremendous influence on my life this year in the area of guarding the tongue. It’s like a daily devotional on how to be wise with your words. Slander, gossip, tearing down of others; these are all clear biblical sins, yet such behavior is fairly common even among Christians. And I’ve found myself tearing others down behind their backs for no good reason. I’ll even make pronouncements like, “I’d say this if they were here.” Really, would I? or the better question, SHOULD I? (even if I WOULD).

He makes the case that the tongue is the gateway to the heart. It’s a bit of a reversal on the New Testament assertion “out of the overflow of the heart the mouth speaks.” Yet both realities are true. Sometimes you act yourself into feeling and other times you feel yourself into acting. Our tongue both reflects and shapes our heart. And the act of guarding the tongue is a powerful spiritual discipline

This book was written from a Jewish perspective, so at times the writing seems to equate one’s salvation with the care of the tongue. You’ll need to translate those sentiments through a Christian filter – but it is worth the effort. There is also a fair amount of Hebrew text in the book – mostly on the front and back end. But even if you can’t tell  Hebrew script from cat litter scratches, you’ll still be able to navigate this book.

Lots of other books to recommend this year. I’ve lumped them into some broad categories to help narrow the selection. Pick one for reading this holiday season and make the most of any days off.

The Collapse of Parenting –  What is one of the main challenges of our modern world? A culture of disrespect. Sax points back to the breakdown of authority in the home as the root of this issue. Definitely worth reading. Bottom line takeaway: “Parenting is hard. Do your job.” Chocked full of stories that will stick with you.

Transgender – A really short and thoughtful book on a difficult topic. I liked this better than many other longer books on the subject.

How We Love – Every married couple should read this book. Even if you put it off for a year and your wife keeps telling you how much it meant to her. Even if you work in marriage ministry and think you know it all. Even if you teach marriage seminars. Don’t be that guy (yes, I was that guy). Helps unpack how one approaches love based on the way you were shaped in your home growing up. So insightful.

The Apostolic Fathers – If you read any book other than Chofetz Chiam this year, may it be this one. It is a collection of writings by the first generation of Christian leaders that followed on the heals of the apostles. Some (like Polycarp) were disciples of an apostle or disciple of a disciple of an apostle. Some of the writings are less relevant, but many are so rich in story and meaning, you’ll be blown away (like Polycarp’s Martyrdom story or “The Didache” – the earliest known manual on how to do church). You can nibble on this in small bites all year long as it is mostly a collection of short letters between many of the churches of the New Testament. The most inspiring part of this is to see how much of the theology of the New Testament is clearly repeated in these early writings. Some of the letters feel like collections of Bible verses. A good reminder that the early church was on the right track and not invented when voted on 400 years after Christ. Make sure to read the introduction as it really helps set you up to get the most out of it.

You Are What You Love, The Benedict Option, Life Together – There is so much overlap between these three books, I’m not sure how to address them separately. Life Together by Bonhoeffer was my favorite. Because it’s Bonhoeffer. Thoughts on how young men in Bonhoeffer’s illegal seminary live and follow Christ in community. The  chapter on listening is worth the book. And it’s the shortest book of the three. You Are What You Love is summed up by the sub-title, “The Spiritual Power of Habit.” What you do every day shows what you really value, or, as the author would say, what you WORSHIP. The Benedict Option seemed to bring the two together by exploring how modern believers can live in a culture that is increasingly hostile toward their beliefs. His strategy is to view ourselves as modern day Benedictine monks who gather in the monastery for worship and growth, yet go out into the city to serve and love on others.

Mila 18 – I didn’t read a ton of fiction this year, but this one was a GEM. It’s probably considered “historical fiction” as it is a fictionalized version of events that actually occurred. I’ve enjoyed Leon Uris books (Exodus, Armageddon) and this one delivered as well. Story of the Warsaw Ghetto and the struggle to survive and fight back. Interesting anecdote on why we say, “Catch 22” instead of “Catch 18.” Joseph Heller was set to release his classic work with the title “Catch 18” when Mila 18 came out. To reduce confusion, Heller’s publisher chose the number 22 for his book.

I also re-read a few novels that I can’t get enough of: Jayber Crow, Fahrenheit 451 (I’m always amazed by how much there is to glean from this short book year after year), and Zen and the Art of Motorcycle Maintenance, which isn’t a novel, but feels like one at times. 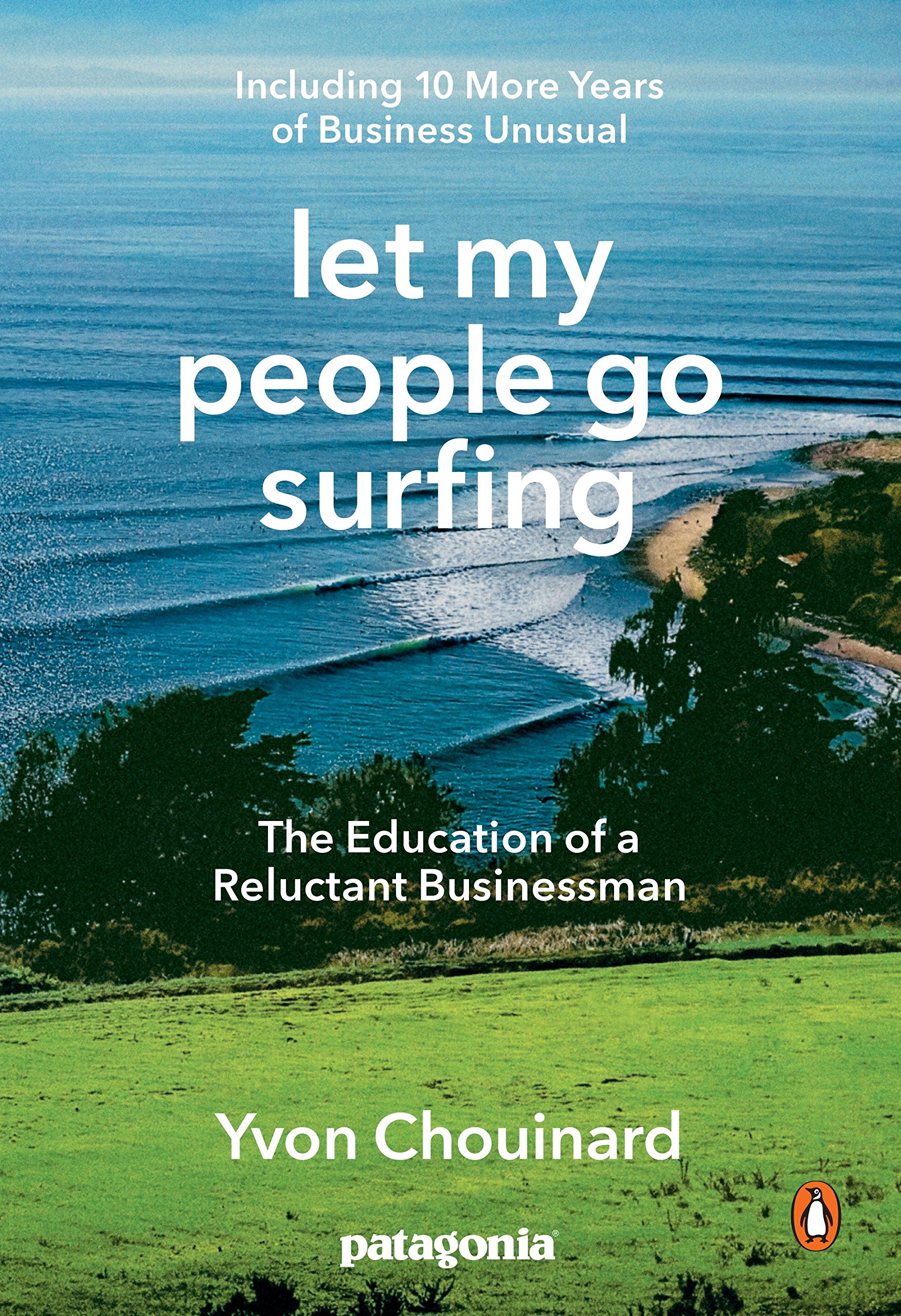 Let My People Go Surfing – The founder of Patagonia chronicles his journey and the philosophy that have intimately shaped the company. I loved seeing how Patagonia is ferociously committed to their values and the outdoors. Even when it costs more to live out these values. But these values have shaped some of their most important innovations. In an age where so many up-and-coming companies compromise for a cash out – he hasn’t. Of course I don’t agree with all of their company values (i.e. support for abortion being the MAIN one), yet the story was inspiring.

Effective Executive – Third time I’ve read this and can’t get enough. Drucker is the gold standard on leadership and management. His point in this book is that it starts with you: your own personal management. Unless you are a cog in an assembly line, every modern knowledge worker should read this.

Be Obsessed or Be Average – Cheesy title. Over the top assertions about how to make the most of life. Depicts wealth as the pinnacle of success. So much I find ridiculous, yet I loved this book because of what it called out of me. Wherever you are in life, this book can get you going. Are you going to step up to the challenges you’re facing or not?

Tools of Titans – I love Tim Ferriss’ podcast (Well, mostly. A few episodes are over the top and I’ve avoided.) This books culls the best of what he’s learned from other top performers in one volume. Worth pouring over and pulling out key ideas.

Words on Target – A friend and mentor recommended this to me because he lovingly, yet firmly said I needed to learn about the word “Subtlety.” Everything about the cover and sub-title screams “lame-o,” but it is gold. She unpacks three words: Energy, Economy, and Subtlety. I read it in between rounds of edits on my book and cut out over 1,000 words as a result. Definitely worth reading.

Perennial Seller – How do you create something that will keep selling year after year? Ryan Holliday ponders this question through the lens of a 60 year old book he stumbled upon that sells more now than it did when released. Bottom line: focus on quality. Create something that will last. Avoid writing books that are irrelevant soon after completion, like, “How to Survive Y2K.”

Hero of the Empire – I was familiar with the story of the prison escape that launched Churchill’s political career. Millard unpacks it and paints the bigger picture of the Boer war. I preferred her account of Teddy Roosevelt’s exploration of the Amazon. Both are worth reading.

Desert Solitaire – Edward Abbey lived a year as a ranger in Canyons National Park. He shares his experiences, his hopes, his pains, and the beauty of the park with masterful writing. Great as an audio book.

The Blood of Emmett Till – I’m embarrassed to say that before this year I had never heard the tragic story of young Emmett Till. Murdered for the slightest social mis-step, a whistle at a white woman, the story is gut wrenching. Even more tragic was hearing his accuser admit her lie last year. A must read.

How to Read More This Year

This was by far my most productive year of reading, almost doubling the number of books over last year. The difference came down to four things:

View all posts by John